Hip-hop’s pulse during the 90’s was fresh, original and all up in ya’ face! The blood flowing through each emcee was equipped with lethal and deadly metaphors, rhyme mechanisms, style and punch lines.

Although, the golden era of hip-hop may be a thing of the past I was recently able to relive it through the creative mind of photographer Naskademini in his hip-hop showcase, Hanging Pictures On My Wall (P.O.M.W).

Walking through Hanging P.O.M.W felt as if I was taken back to the days when Nas and Biggie were blasting through your stereo with their rough and raw flow. Surrounding me were walls covered with pictures of indisputable lyricists that once claimed hip-hop’s name and who rightfully reserved a spot in hip-hop history.

“I wanted to recreate the bedroom of a kid who grew up in the 90’s and the nostalgic feeling that came with that era,” said Naska.

Naska’s inspiration for this showcase was quite unique. He discovered his vision while viewing an old photograph of himself surrounded with posters of music icons while Juicy by Biggie played in the background. A particular line stood out to the talented photographer when Biggie said, ‘I used to read Word Up magazine. Salt'n'Pepa and Heavy D up in the limousine. Hangin' pictures on my wall. Every Saturday Rap Attack, Mr. Magic, Marley Marl’. That moment unlocked Naska’s creativity and inspiration for his Hangin’ P.O.M.W showcase.

Hip-hop’s style, fashion, affordability and rawness are what have stood out most to Naska as a fan. He explains back during the genres upcoming it wasn’t such a luxurious excursion to claim and maintain a spot as it is in today’s revolutionized sound.

Hip-hop demanded individuality and an original tone to everyone confident enough to grip the mic. Sounding like the next emcee was forbidden and would quickly make you a target for ridicule.

Naska first featured Hanging P.O.M.W in Toronto but aspires to bring his vision overseas to Japan, Finland, Germany and lastly his hometown, Montreal.

Considering Toronto now has its official superstars in hip-hop, he credits Toronto’s energy surrounding that movement and views it as a current leader in hip-hop music. Moreover, he explains how hip-hop is trending in Montreal as they welcome more shows and concerts, which he believes, has helped revive the state of hip-hop music. 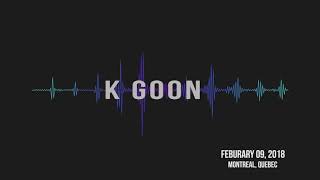